This project has actually been around for quite a while now; the name comes from it being a clone of “the old Google Reader”, prior to the removal of the social features. As I mentioned in the introduction, I never actually used those features—so we’ll just see how it goes as a RSS reader application.

Signup is pretty easy—you can just log in through your Google or Facebook accounts. Transferring your feed selection from Google Reader to The Old Reader isn’t as seamless as Feedly, however: You have to export your feeds via Google Takeout and then upload them to The Old Reader.

I’m not off to a great start, though: “There are 35171 users in the import queue ahead of you.” The service has been very heavily hit with the sudden influx of users migrating away from Google Reader. They do load up a Trending feed that lets me go through the user interface immediately: 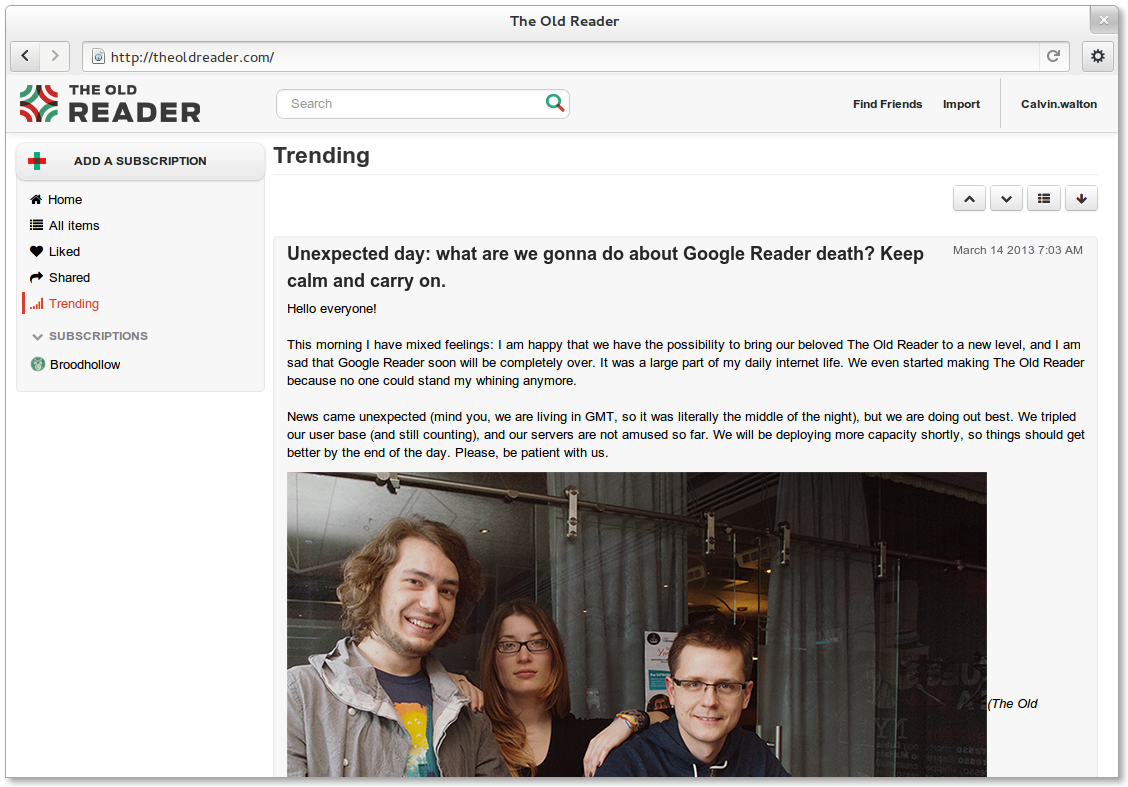 And, well, it does pretty much exactly what I want. Full article views and show only unread are supported; it even defaults to my preferred ‘oldest first’ on the All Items view.

There are minor quirks, of course. One of the happiest days of my Google Reader usage was when I finally figured out how to hide the sidebar (see the screenshot in the introduction). And The Old Reader brings the sidebar back, in full unremovable glory. I don’t really mind the space lost; the article page is big enough. The real problem is simply that if the mouse cursor is over the sidebar, the scroll-wheel on my mouse won’t scroll the page!

If I could hide the sidebar, The Old Reader would be perfect. As it is, it’s very good. One question is left: will they recover from the influx of Google Reader users and get the feed refreshes back up to speed? I hope they do.

Feedly is the first in the list of cloud RSS reader software that I’m taking a look at as a replacement for Google Reader (see the Introduction for the index of all the parts.)

Somewhat ironically, Feedly might be at least indirectly responsible for Google Reader’s shutdown. It’s been around for quite a while, but Feedly doesn’t actually run its own RSS aggregator. Instead, it’s simply a front end that accesses your feeds in Google Reader via an undocumented and apparently private API. They have recently announced that they are writing their own RSS aggregator backend, and will have it deployed in time to seamlessly switch over when Google turns off Reader.

A curious result of their use of the private Google Reader API is that Feedly isn’t actually an application hosted on a web page. Instead, it requires installation into your browser as an extension, available for Firefox and Chrome. This is an issue to me, as I regularly switch browsers—and interesting hardware like my ebook reader simply can’t use it at all.

At first glance, it certainly is prettier than Google Reader ever was: 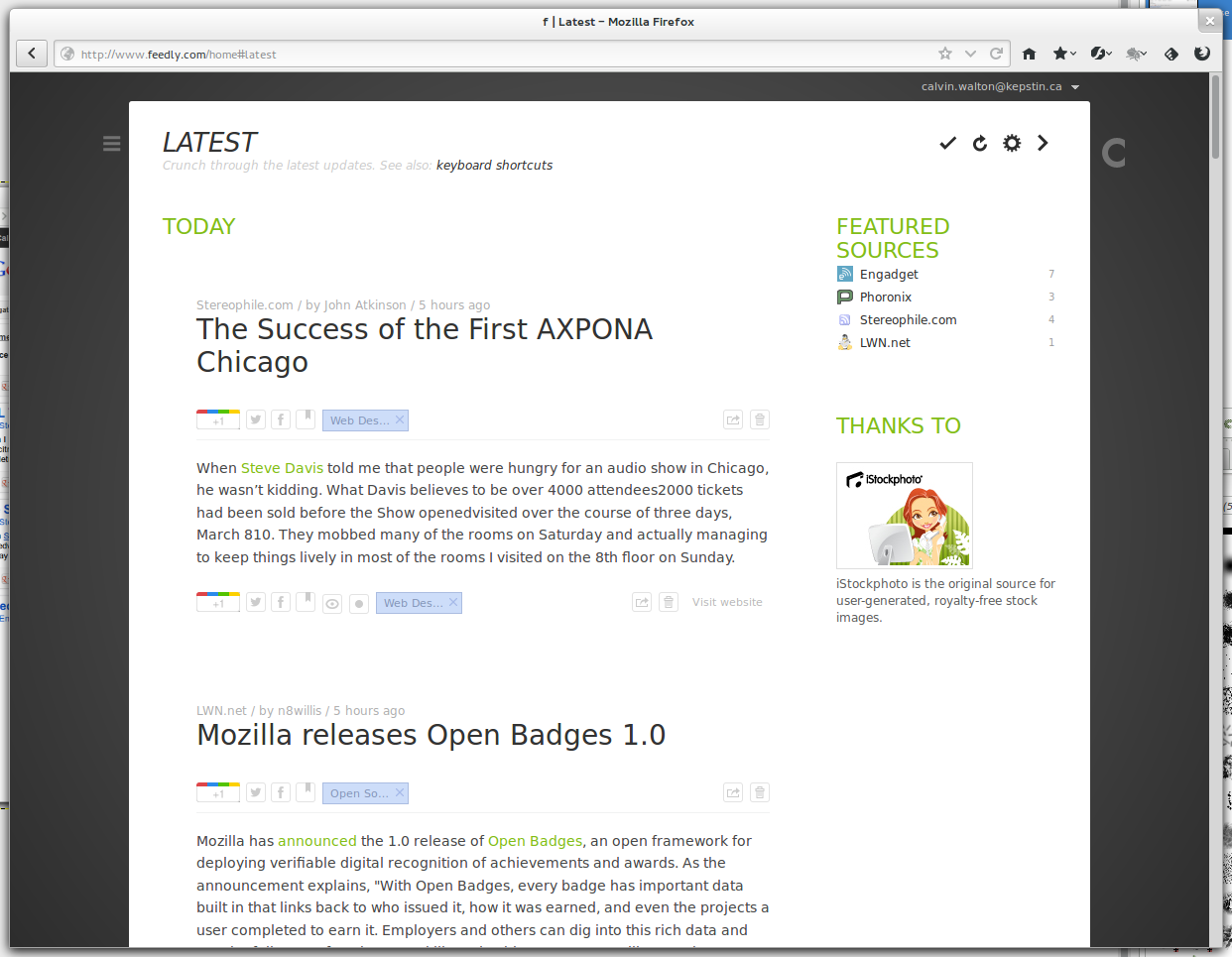 And it is quite full featured, and can be configured to replicate my preferred view from Google Reader: only show unread, with oldest messages first. There’s minor bugs in various places—e.g. if I have no unread articles, it will instead show a seemingly random set of previously read articles—but they seem responsive to user feedback. They haven’t switched away from the Google Reader backend yet, so how well they will scale is still an unknown.

The layout at the moment is somewhat annoying; the narrow columns cause some images—comics in particular—to be rescaled at smaller than original size, making text difficult to read. I suspect that advertising will grow at some point, although they may offer a paid subscription service in the future. One curious thing is that they hope to open up their backend (which has a Google Reader compatible API) to allow other services to use it!

Feedly is nice, but the requirement for browser extensions and special mobile applications is somewhat limiting. I’m still searching for the perfect Google Reader replacement…

Like many other people online, I’m a heavy user of the Google Reader application now left to find some replacement for this aggregator of interesting news that I’ve subscribed to. I know that Reader had some social features at some point, but I’ve never actually used them. There was a single thing that I valued about Reader: it allowed me to leave off checking my feeds on one computer, and resume later on a different box. It’s a “cloud-based” RSS reader, to use the modern parlance.

Since Google has announced that they’re cutting the service off, I’m now looking for an alternative. But first, let’s take a look at what I have right now: 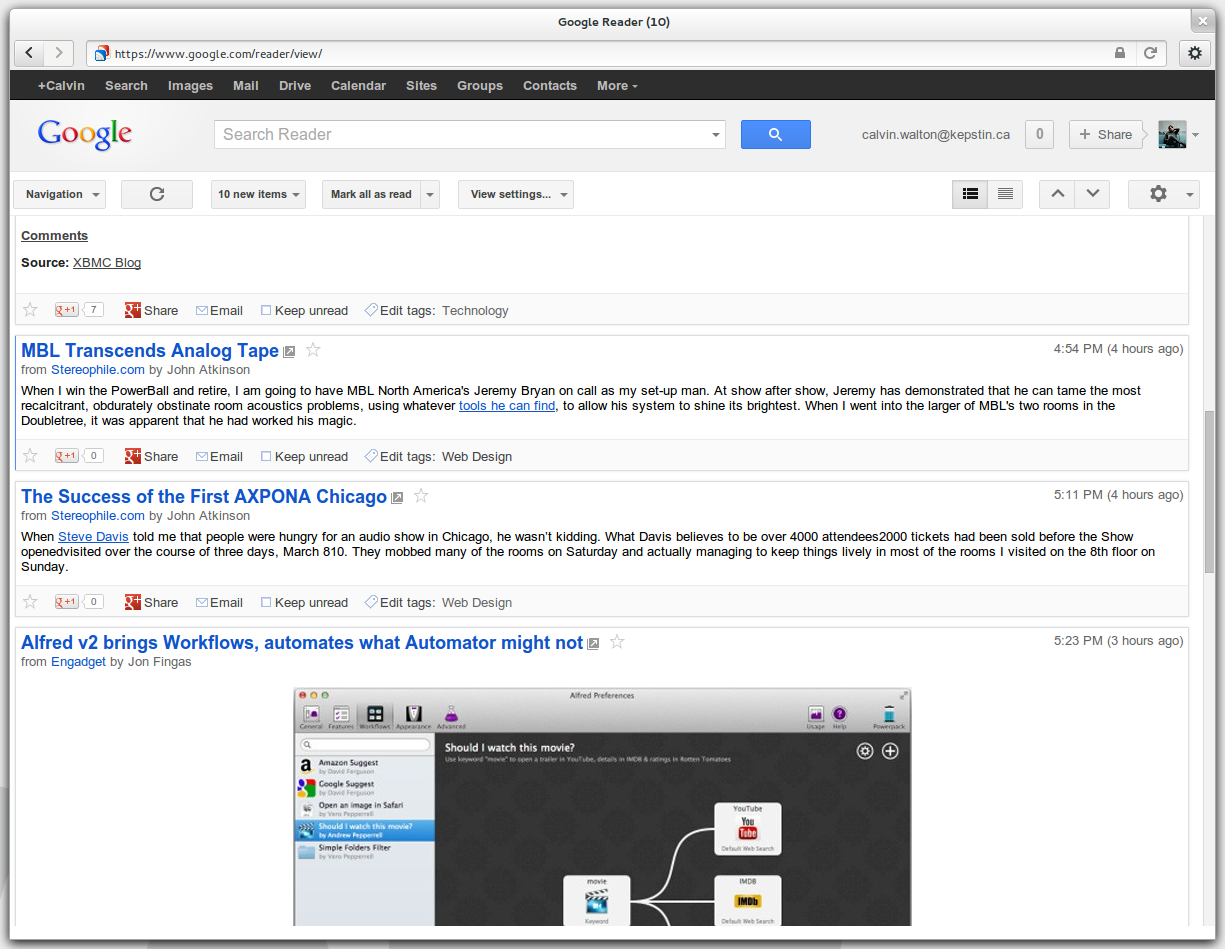 There’s my feed. I use Google Reader in its most simple mode; a continuous list of entries ordered from oldest to newest with previously-read entries hidden and with article content inline. As I scroll past each message, it’s automatically marked as read; and I use the “Keep unread” option to mark things that I pass by now, but want to take a look at when I have more time.

While much of this could be gotten via social media, the experience is completely different. Social Media is constantly running in a ”push” stream. It always shows you the newest thing first, popping that down and out of view as soon as something else comes in. Social media is limited to tiny sound bite clips. With the RSS experience I use, it’s the other way around; things wait for me to come view them, and I see everything come in the order that it happened. (Particularly important if I, say, don’t check one day and miss a strip from a daily comic!) The longer form allows you to get at minimum a detailed introduction into what is linked; and many sites will inline entire articles and full-sized images so you can browse without even opening another tab.

I’m sure lots of other services are popping up now with alternatives to the soon-to-be-gone Google Reader. I’m trying a few of them, and I’ll let you know how they go, in these follow-up articles: