So, I just bought a cheap 16GB SD card today. My original plan was to use it as a replacement to the failed flash drive in an old EeePC laptop. (As it turns out, the SD card reader in said netbook is broken, so the plan failed.) But I got curious; what benefit do you get by paying more for an SD card? I have two to try today: An ADATA class 10 16GB card, and a rather older Lexar Professional ×133 2GB card (it predates the ‘class’ designations).

So, let’s pull out the benchmarks. First the cheap ADATA card: 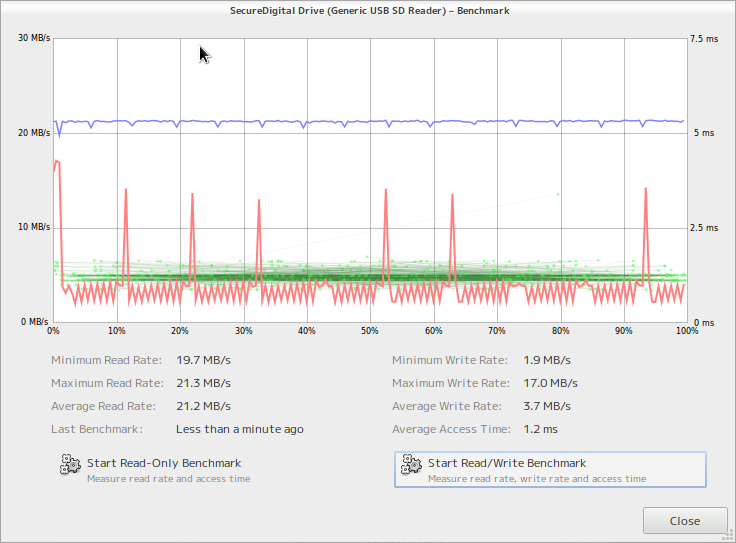 Hmm. The read speed (blue line) is fine, it manages to saturate the USB 2.0 bus when reading. But that write speed is pitifully slow. Given that the raw images from my camera hit nearly 8MB, that means that it would take nearly 2 seconds to write a single image to the card. Maybe it’s a good thing that the EeePC’s SD card reader failed—using this as a system disk would not have been fun.

Now lets take a look at the rather more expensive (and older) Lexar Professional ×133 card: 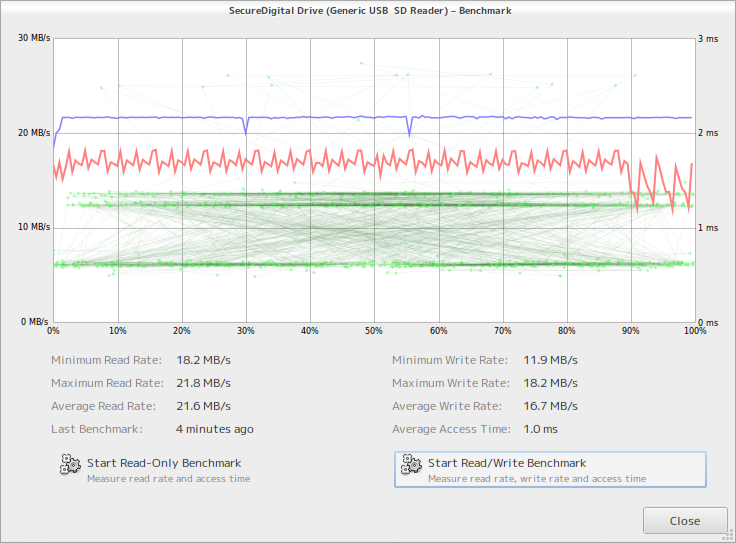 Now that’s more like it. Again, the read speed saturates the USB 2.0 bus that my card reader is on—but this time, the write speed manages to nearly nearly keep up! That’s an average write speed of over 16MB/s, writing a raw image from my camera in half a second. (Conveniently, my camera tops out at 2 images per second.) The green dots representing read latencies also have fewer outliers, note the difference in scale between the two images.

This line of SD cards (still called the same “Professional ×133”) has been updated with larger capacities now, and they claim that their current cards have a minimum write speed of 20MB/s. I believe them. And if you want a faster card, paying more for the higher-end models is certainly worth it.